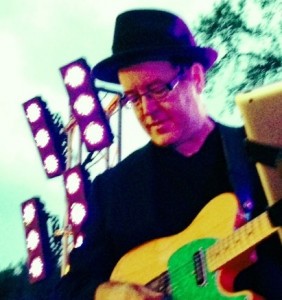 STEVE GIBSON (Co-Founder)
Steve is a guitarist and music teacher who has been working in the Bay Area since moving to Berkeley in 1984. He founded BandWorks with Jeremy Steinkoler in 1993. In addition to his private teaching and BandWorks classes, Steve has taught at Cazadero Performing Arts Family Camp for many years, worked in London as a music director, taught band workshops in Dublin (Ireland), and contributed to Guitar Player magazine. As a guitarist, Steve has performed at many clubs and festivals throughout northern California, including the High Sierra Music Festival, the San Jose Jazz Festival, and the Sonoma Salute to the Arts. His recording “Sunday” was used by the Augustino Dance Theatre Company. Most recently, Steve has performed and recorded with Andrea Hurley and Her Very Attractive Band, Marie Schumacher’s Invisible Band, The Kevin Beadles Band, Lonnie Lazar and the Vaporizors, Chowbucket, and Jemimah Puddleduck, among others. In addition to guitar, Steve has taught saxophone, mandolin, bass, and piano. He is also a registered Music Together teacher.

JEREMY STEINKOLER (Co-Founder)
Since picking up his first pair of drumsticks at the age of 10, Jeremy has gone on to teach private students, drum clinics, and rock band workshops in Ann Arbor, MI; Dublin, Ireland; and all around the San Francisco Bay Area. He founded BandWorks in 1993 with guitarist and band mate Steve Gibson. He has been on the faculty of Cazadero Performing Arts Family Camp for the past 16 years, where he was the Co-Director from 1999-2001 and served on the Board of Directors from 2010-2013. In addition to teaching BandWorks classes and a full roster of private students, Jeremy maintains an active performing schedule, playing around the Bay Area on a weekly basis with his own J. Steinkoler Quartet, the unique saxes-and drums trio Mo’Fone (featured at the Monterey & SF Jazz Festivals), and assorted other projects. He has performed at dozens of popular Bay Area venues and festivals, including the Monterey, San Francisco, and Sonoma Jazz Festivals, Art & Soul Festival, Yoshi’s, the Shoreline Amphitheater, and at Lincoln Center and the Village Gate in New York City. He has played with Dave Ellis (The Other Ones, Charlie Hunter), Adam Levy (Norah Jones, Tracy Chapman), Kirk Joseph (Dirty Dozen Brass Band), Guru Garage, Kevin Beadles Band, Hot Links, Christy McCarthy, and many other top touring bands and musicians. His music has been featured on radio stations all over the globe, and his bands have garnered a number of “best of” awards and rave reviews. Jeremy is proud to be endorsed by Vic Firth Drumsticks, Istanbul Cymbals and Aquarian Drumhead and Protection Racket Cases.

STACE WRIGHT (Program Manager)
Stace started teaching with BandWorks in 2004 and has taught several bands in every 8-week workshop since. He joined the administrative side of the company in 2015. He loves building bands, working with musicians,  planning new events and constantly improving our ever expanding clinic, workshop and summer camp programs. Stace was born in Oregon, spent his teen years in New Mexico and graduated from the University of California, Berkeley with a degree in Geography in 1994. Since that time he has been making maps with his company Eureka Cartography, raising a family, traveling and playing music. His band The Recyclists plays out monthly, often in the East Bay. He believes music is the fountain of youth.

Seth Affoumado is a musician, teacher, artist and performer.  Seth not only manages our San Rafael facility Sunnbolt Studios but also maintains our equipment and provides concert support for our many performances. Seth has been with BandWorks for many years as a teacher and is excited to take on more responsibilities as the company continues to grow.